A full exhibition catalogue will be published in print and online, alongside a new translation of the White Rose leaflets, in an edition of the Taylorian Treasures series in June 2019. In the meantime, here is a brief overview of the exhibition. 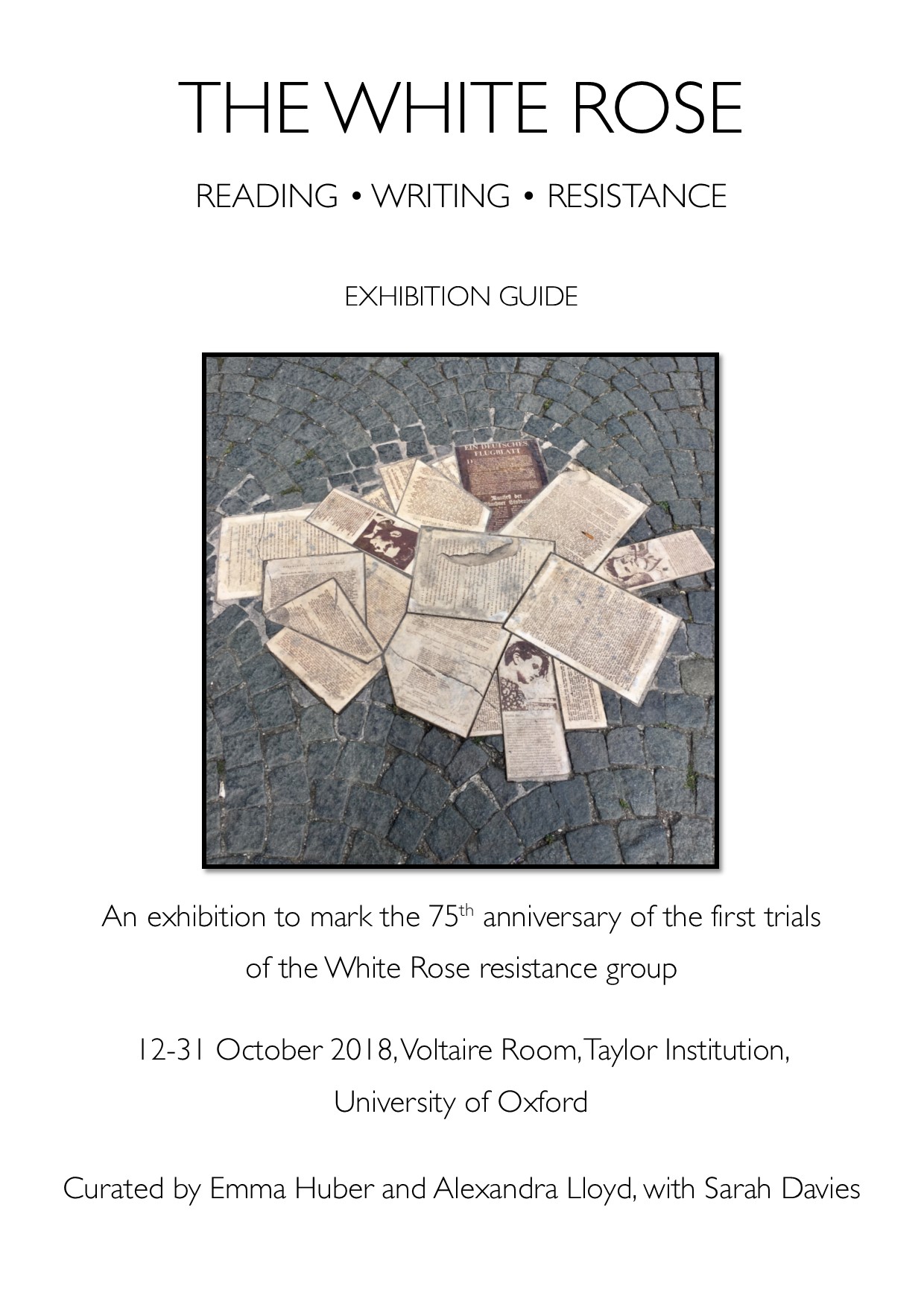 There is a good deal more to be said about the White Rose group than can be presented in a handful of exhibition cabinets. Our aim here is to show a snapshot of their lives, their resistance activities, and their legacy, through examples of what they read and wrote. The exhibition displays items from the world-class holdings of the Taylor Institution Library and the Bodleian Library. Where possible we have exhibited editions comparable or identical to those which the White Rose members read.

This cabinet introduces the six core members of the White Rose. The group’s reach extended far beyond Munich, and many individuals were involved on the periphery. There were further trials in Hamburg and in other German cities, resulting in prison sentences and executions.

Cabinet 2 — How Reading Shaped the Path to Resistance

What motivated the members of the White Rose to resist? What influenced them to reject Nazism? One answer to this persistent question lies in the fact that the members of the White Rose were voracious readers. Their letters and diaries make frequent mention of the books they were reading, and they sometimes read communally, reading passages aloud in turn, and discussing the ideas they encountered. The materials in this cabinet show some examples of the literature that influenced their intellectual and moral development.

Under the Nazis, a list of banned authors was compiled and published by the Reichsministerium für Volksaufklärung und Propaganda [Reich Ministry of Public Enlightenment and Propaganda]. Authors, living and dead, were banned for being of Jewish descent, or because of their political convictions. Those suspected of Communist or pacifist sympathies were also banned. Authors whose works were illegal under the Nazis included Franz Kafka, Erich Maria Remarque, Arthur Schnitzler, Kurt Tucholsky, and Else Lasker-Schüler.

Cabinet 4 — Writing and Resistance in the German Context

The White Rose used the written word to call the German people to resist Nazism and to contribute to an end to the Second World War. They distributed leaflets — Flugblätter — to spread their ideas and to reach as many individuals as possible. The ‘Flugblatt’ was the first medium of mass communication, and in the history of the German-speaking lands we find leaflets and flyers used to disseminate ideas and information, for the purposes of propaganda and control, as well as provocation and resistance.

In total six leaflets were printed and distributed by the White Rose. The rough version of a seventh leaflet, drafted by Christoph Probst, was found on Hans Scholl when he was apprehended at the university in February 1943. Hans tried to destroy the incriminating paper but was unable to do so.

Cabinet 6 — The White Rose: Its Legacy in Literature and Film